I do love a good potato. Baked, fried, hash browned, pancaked, twice baked, curried, boiled, YUM! They all have a place on my plate because they can be crispy and soft, mild flavored or boldly spiced. Would you like to join me as I share my spud secrets?

A good recipe takes some planning and cooking time. As a collective community, many of us are home bound and have the time now to explore in the kitchen. As a bonus, spuds are cheap. I just snagged a 10 pound bag of russets for $3.50.

I love crispy potatoes so decided on potato pancakes for my first recipe. Actually, I got the idea to share my spud secrets while I was making french fries a few nights ago. Yes, you can make french fries at home. They are so good piping hot out of the oven! I’ll feature those in an upcoming post. Now back to the potato pancakes recipe.

Peel and grate the potatoes. I use a Kitchenaid stand mixer with the grater attachment. A box grater using the largest grate opening works too. Grate the onion using the same method.

Let the potatoes, onion and salt sit in a colander while you are preparing the rest of the dinner, about 15 minutes. The potatoes need to drain liquid so they fry with minimum grease spatter and turn crispy. Use a paper or clean linen towel to ring out the last remaining liquid and/or to speed up the draining process. Discard the drained liquid.

The drained mixture is next mixed with 1 egg, 1 tablespoon of flour and 1/2 teaspoon of ground black pepper. Add more or less flour depending on how wet the potato mixture is prior to adding the egg.

This photo shows the ingredients just prior to mixing the egg. Those 4 potatoes in the background will turn into baked potatoes today with homemade french onion dip, YUM. Now back to the current recipe…

Now heat a large skillet with at least 4 tablespoons of extra virgin olive oil or the fry oil of your choice. There will be 2 fry batches using my 11 inch skillet. So I want all the oil in the pan from the start to fry both batches.

Be patient and wait for the oil to sizzle. Test the oil by flinging a few droplets of water from your fingertips into the oil. If the droplets jump, then the pan is hot. The oil should be shimmering too.

Now drop about 1/3 cup portions into the hot oil and flatten. If a sizzle sound is not heard, the oil is not hot enough. So wait a few seconds before continuing adding to the pan. Leave space between the mounds, enough to reach under with a flipper. Flip when the edges start to brown. Do a peek under to ensure the entire patty is brown before flipping. We want a nice, crispy patty! It should be only a few minutes of cooking on each side if your oil is hot enough.

We enjoyed cilantro topped crispy tuna quinoa bites on lettuce wraps with the potato pancakes. I’ll share those in another post as some point. I did not take prep photos of that dish. But it might be something you would like to try. They are crispy and delicious too:) 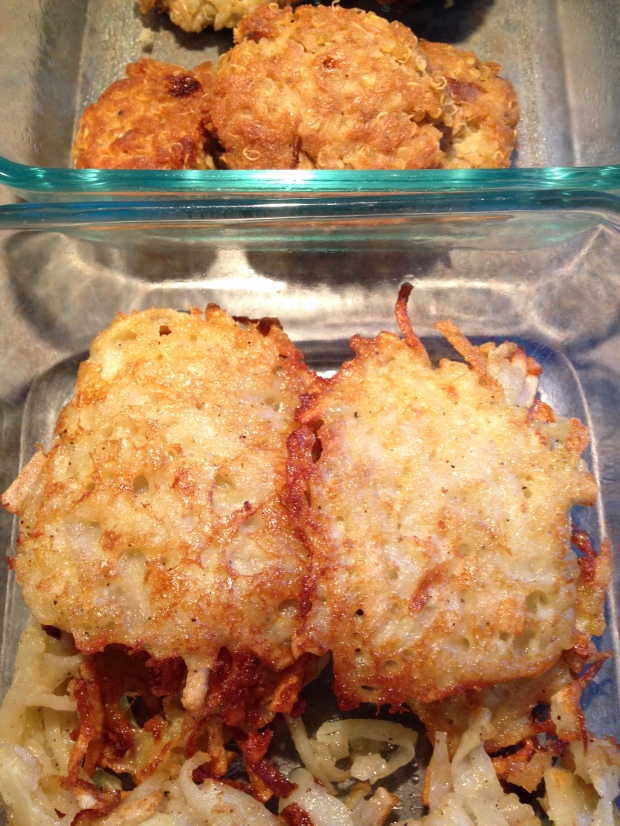 The second best part about this recipe is that there are leftovers. The recipe makes enough for 4 people. I pair the leftover pattys with fruit and tea for a quick breakfast. My tea blend lately is mint and fennel with a sparse portion of Thai basil since my basil stock is almost out.

Hope you enjoyed my first Adventures of Shirley’s Spuds!

This is Shirley Merker's personal blog. You are free to CASE for personal and business use but please give me credit. Please do not submit my work for contests or publication without my approval. The content of this blog is my sole responsibility as an independent Stampin’ Up! demonstrator. The use of and content of the classes, services, or products offered are not endorsed by Stampin’ Up!